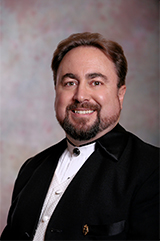 Tyson V. Repke is a former submarine Nuclear Reactor Operator turned teacher, musician, conductor, and actor. He holds a Bachelor’s degree in Music Education from the University of Northern Colorado (graduating summa cum laude) and a Master of Music degree in Conducting from the University of Denver’s Lamont School of Music. He has taught/conducted middle school, high school, collegiate, and adult choirs in Colorado for over nine years. Currently, he conducts the choirs at Mountain Ridge Middle School.  Mr. Repke is also an avid performer, singing almost every style from opera to jazz. He has been a section leader and/or featured soloist for numerous performing ensembles across Colorado, performed the National Anthem for several sporting events including DU Pioneers Hockey and the Denver Broncos, and sang backup vocals for Josh Groban in concert at Red Rocks Amphitheatre. On stage, he is best known as a character actor or tenor buffo.